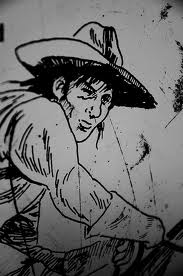 Humphrey Kynaston (1474-1534) was the son of the High Sheriff of Shropshire, Sir Roger Kynaston (1432-95) and his second wife Lady Elizabeth Grey (1440-1501) whom he married in 1465 and had seven other children with; Jana Jane (1466), Lancelot (1469), Margaretta, Johanna, Jana Anne, Maria (1470) and Ermine. Elizabeth Grey was the daughter of Henry Grey and Antigone Plantagenet (the illegitimate daughter of Humphrey, 1st Duke of Gloucester).
Humphrey and his siblings were raised at Myddle Castle, previously belonging to Sir Roger's first wife Elizabeth Cobham with whom he had a son Thomas, and would later be inherited by Humphrey who allowed the castle to fall in disrepair due to his heavy debts.
Humphrey's first wife was Mariona ferch Williamus ap Griffith ap Robin, with whom he had two children; Edward and Isabella. Humphrey's second wife was Isabella ferch Maredudd ap Howell ap Morrice of Oswestry, and together they had six children; Margaretta (1515), Edward (1517), Thomasina, Robert, Roger and Jane.

Humphrey's behaviour was considered reckless, often falling into trouble with the law, and it earned him the nickname 'Wild Humphrey'. He was impulsive and irresponsible and very soon his lands and castle fell into disrepair as he became heavily in debt. He led a dissolute lifestyle, was arrogant and had no respect for reputation or person.

On the 10th May 1486 there was a royal proclamation which demanded Humphrey and Thomas Kynaston to appear before the king and council charged with the murder of a priest; Thomas Kyffin. The proclamation stated that if any person aided them they would also be charged with being partner to the murder and raids. The Kynaston brothers did not adhere to the proclamation to appear before the king's council. Thomas Kyffin was the rector of the parish in which the Kynaston's lived; as rector it was his responsibility to store the grain harvested in barns, it was when these were full that Humphrey raided them, as part of his job to take care of the produce and profits of the local lord.


A Star Chamber document to Cardinal Wolsey outlines the crime committed;
Humphrey and "24 outlaws and other persons came to the castle of Oswestry at midnight and Sir Thomas and others were compelled to yield to Humphrey and when yielded were murdered as was the porter. Humphrey took away £200 in money, plate and apparell and soon after... went to Felton Aber took away corn to the value of £60 of the proper goods of Sir Thomas who had to account yearly to the Lord. Arundel and his auditors one Thomas ap Richard and many others were bound surety unto the Lord and also to the abbot of Shrewsbury for a farm."

An order from the King to the Sheriffs of London to make proclamation within the city and suburbs of London, listed in the Calendar of Close Rolls for 23rd December 1487:

“... the King considering the abomination of murders, robberies and other offenses disobediences to his command, committed by Thomas, Humphrey, Oliver and Richard Keveston, gentlemen of Shropshire, contrary to their allegiance, by advice of parliament on November last, ordered that after writs of parliament issued to the sheriffs of London and Salop (Shropshire), the said parties should appear before his highness within fifteen days … to answer charges against them: and should they fail to appear, then they shall be adjudged as persons outlawed of felony and foreit life, goods and lands as if lawfully outlawed by course of law."

In December 1491, when out riding Humphrey, his brother Thomas and their friend Robert Hopton, a labourer, without provocation killed John Hughes. The attack was cowardly and brutal; Humphrey struck Hughes on the right side of his chest with a lance, which killed him, and then once dead Thomas struck him on the left side of his head with a sword and Hopton on the calf of his leg with a bill. During the trial it was revealed that Robert Thornes also aided and abetted the crime, he was the husband of Jane Kynaston, and he along with Sir Roger Kynaston and 34 others were accused of housing and feeding the three men at Pontesbury after knowing they had committed the crime. It was found unquestionably as murder but shortly after his trial on December 20th 1491 and before he was incarcerated, Kynaston fled the crumbling Myddle Castle, leaving behind his wife, family and enormous debts. He then found refuge in a cave in the west point of Nesscliffe Rock, where we would then live for the rest of his life.
On the 20th December 1491, Humphrey was found guilty of the murder of John Hughes at Stretton, and declared an outlaw by King Henry VII. 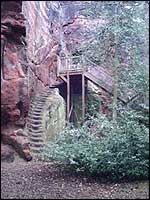 From 1491-8 Kynaston lived the life of an outlaw and highway man, similar to the fictional Robin Hood; he stole from the rich and gave it to the poor. In return for this act of generosity, the locals protected him from the law and provided him and his horse with food. One time the local sheriff attempted to capture him by removing planks of wood from the Montford Bridge to stop Humphrey from crossing the River Severn, however Humphrey used his horse to leap over and clear the river.
Beelzebub would graze in the fields of loyal neighbours surrounding the hideout and would come whenever Kynaston whistled. The local people respected his secrecy and gave him food from time to time, probably in exchange for a share of his spoils.
The cave was a perfect vantage point and from the top of Nesscliffe Hill, Kynaston could see the road below winding between Shrewsbury and Oswestry and could target the merchants in their carts carrying wool, silver or gold or travellers in their coaches.
One day he walked into his favourite pub, The Old Three Pigeons of Nesscliffe, which sits at the foot of the cliff, and took offence when he saw a man sitting in ‘his’ seat inset into the fireplace. Without further ado he drew his pistol and shot the man dead; he escaped by climbing up the chimney, out onto the roof and away. Today, the pub still features Humphrey’s seat carved out of the large fireplace as a sandstone cleft.

Humphrey was pardoned by the crown; either in 1493 by Henry VII, or later in 1513 when Humphrey provided 100 men to aid Henry VIII in his French campaign and received a royal pardon and knighthood three years later.
Humphrey died on the 1st May 1534. The cave in which he lived became known as 'Kynaston's Cave' and included two rooms, one for himself and the other for his horse Beelzebub. The engraving in the cave of 'H.K.1564' was made after Humphrey's death, and probably belonged to his grandson Humfridus (b.1530) instead.
Posted by Danielle Evelyn at 18:25 10 comments: