One of Berlin's most prominent features is the Brandenburg Gate; standing for hundreds of years and towering over the square in front of it which houses the city's embassy buildings as well as the most expensive hotels, including the hotel balcony from which Michael Jackson infamously dangled his infant child. 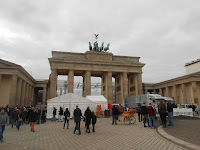 The gate was built in 1791 as one of the city's fourteen gates, its design influenced by the Acropolis in Athens. The statue on top of the gate was created by Gottfried Schadow and is called a Quadriga - chariot drawn by four horses - and is pulling on it Victoria the Roman goddess of victory, however originally it looked a little different to how it does today. 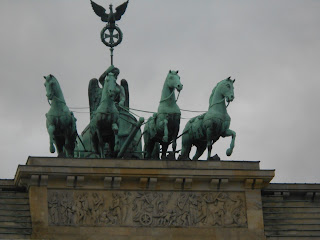 When it was first constructed the woman on the statue was holding an olive branch, the symbol of bringing peace to this land, however then it happened in 1806 that Napoleon defeated Prussia in battle (this area included modern day Germany).  As a trophy to remind himself and his enemies of his victory in battle against this powerful enemy, Napoleon took this statue back to Paris with him.

In 1814 the Prussians won a great victory over Napoleon and his French army, and so took their statue back with them. They made a minor adjustment to it before putting it back on top of the gate though; the olive branch that the statue was holding was removed and in its place was an Iron Cross - a symbol of Germany and of its military - thereby transforming it into the goddess Victoria,  the bringer of victory. 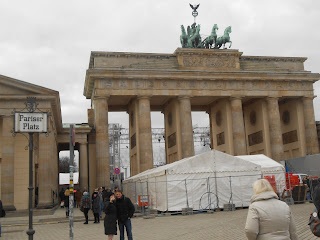 At this time, the square that the gate is located in was simply named 'The Square', but after the French defeat and reclaiming their iconic statue, it was decided that the square would be renamed to 'Pariser Platz' translated to 'Paris Square'. This change in title was not a coincidence; the statue of Victory would forever more stand over Paris Square - 'Victory over Paris'. In other words, it became ingrained in Berlin's architecture that Prussia brought Napoleon down in a crushing defeat. And they say the Germans don't have a sense of humour ;)
Posted by Danielle Evelyn at 01:51 No comments:

Chicago May, Queen of Crooks 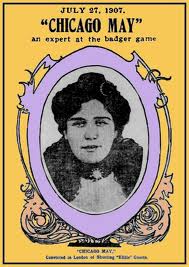 Mary Ann 'May' was the born on the 26th December 1871, as the eldest child of five of a subsistence farmer Thomas Duignan and his wife Mary Elizabeth Brady, she had red hair and blue eyes. When she was eighteen she was miserable with her life and felt overworked by her family as she had helped raise her three brothers and would now be expected to do the same for the new baby. So she stole the family's life savings ($5000 modern day equivalent) and left her home on the day that her baby sister was born. She used the money to buy new fashionable clothes, jewellery and a one way first class steamer ticket to America.

Upon arrival at Castle Gardens in America from Liverpool, May lied her way into the country as she did not hold a passport. She began working as a dishwasher in New York; however the time she spent in the city was hard and she was penniless, so she took a train to Nebraska to stay with an uncle there. Life in Nebraska was less exciting and appealing to May than life in New York, but she fell in love there. Dal Churchill was a crook and could turn his hand to any crime - as May claimed. Dal taught May his tricks of the trade and they soon began robbing banks together. The couple got married but it was short lived as when May went to Chicago and waited for him, Dal went to rob a train but was lynched by angry locals. May was now in Chicago and broken hearted.

It was 1892 when she moved to Chicago and without her partner in crime May was forced into prostitution to make easy money. May found a friend and new crime partner in Dora Donegnan; while one entertained the customer, the other would rob them of their money and valuables. May preferred to be called a 'badger' rather than a prostitute and took pride in what she did; it was often the case that men drugged the girls and May took her stand against this, not hesitating to punch out a mans teeth or use a hot poker to brand pimps - it was through this that she became known as the toughest prostitute among the Chicago cirminal fraternity and gained herself the nickname of 'Chicago May'. May became involved with the police force in Chicago; they themselves were corrupt and become partners in crime of a sort as they took money made my prostitutes, thieves and those who owned brothels and gambling dens. The infamous Charles Becker of the NYPD became one of her protectors - he would later be executed in Sing Sing prison for murder - as he released her when she was arrested and in return she testified on his behalf when his arrests were questioned.

May returned to New York and determined to make a success of it this time; her tricks were becoming more and more devilish, such as one trick where she would entertain her customer and while doing so, use her teeth to steal the jewels from their tie pin. Over time, competition from fellow prostitutes increased and May needed another way to make a living, so she became a chorus dancer in the musical 'The Belle of New York'. However, when May was caught stealing a wallet from a church minister she was faced with a short prison sentence. An acquaintance, Jim Sharpe, offered to marry her to keep her off the streets. May married James Montgomery Sharpe, an army officer, and the couple moved to Belleview in New Jersey. The couple divorced after only three months as James had an unhealthy obsession with trying to murder his brother so May left her husband and she took with her ten thousand dollars of his money.
After years of evading arrest through bribery and blackmail, May found herself in trouble with the NYPD, and so to avoid capture she fled to London, where she could prey on aristocrats and wealthy businessmen.

In 1900 May traveled to Paris to visit the World Fair. It was in Paris that May met and fell in love with fellow Irish criminal Eddie Guerin, and the two carried off multiple crime sprees. Their love affair was to be short lived though, in 1901 the two became involved in a high profile bank robbery which resulted in Eddie's arrest. The two were partisans of the successful robbery of $300,000 from the American Express Office in Paris on the 27th April, however, during his boat ride to escape to England, Eddie was captured. May made her way back to Paris in the hope that she could get Eddie released by attempting to forge his innocence, however May herself was then arrested. In 1902, the pair were found guilty of the robbery by French courts and May was sent to La Roquette women's prison but was then sentenced to five years of hard labour at Montpellier Prison, while Eddie was sentenced to ten years on Devil's Island. May was released early in 1905 for good behaviour, however it said that she in fact seduced and blackmailed the prison doctor into signing a medical certificate so she could be released on health reasons. She returned to her life of crime in order to raise funds for Eddie's escape plans.

May returned to her home town in Ireland, where her family forgave her for what she had done, however the town at large was not as accommodating. The Catholic community were ashamed of her disgraced sexuality and criminality, and so May soon left again for London. While in a London bar, May ran into Eddie Guerin; he had become bitter from his imprisonment and suspected she had played a part in it, however he still convinced her to partner up with him again. May became paranoid about Eddie and was convinced he was going to harm her, so she took all of her prostitution money and fled to Argentina. Eddie was then arrested again and sent back to France on a prison sentence.

In 1907 Eddie Guerin was released from prison, and set out to kill May in revenge for his imprisonment believing that she had betrayed him. Eddie befriended a man called Charley Smith, real name being Robert Considine who was an American burglar. Eddie ordered Charley to kill May, but when he found her, Charley fell in love with her. Less than 24 hours after his release Eddie was shot in the foot; May and Charley becoming the prime suspects. May was sentenced to 15 years hard labour while Charley was sentenced to life imprisonment.

In 1917 after only ten years of her prison sentence, May was released and deported to America - due to her American citizen status through her marriage. She returned to her trade of prostitution, however she was no longer young and her looks had faded. While in New York she found a new young lover, however this did not end happily as he ran off with her money and was never found again.

In January 1928 May caused public controversy when an engagement was announced between herself and a man half her age by the name of Lucas Netley, he was a well known conman. The engagement turned out to be a publicity stunt and was quickly called off despite Netley publishing several stories about their life together, which were most likely invented.

Towards the end of her life May suffered from multiple physical illnesses and as a result became alcohol dependent, however she continued to work as a prostitute until her death.
In 1928 when she was admitted to hospital in Detroit, August Vollmer convinced May to write her autobiography, titled "Chicago May Her Story: A Human Documentary by the Queen of Crooks".
May died on the 30th May 1929 in Philadelphia. It was the day of her wedding to Charley Smith who she had found again in Philadelphia, however upon her death he left and was never heard from again. No one attended May's funeral and she was buried alone, all that is known is that Charley sent a nun to the funeral to represent him.