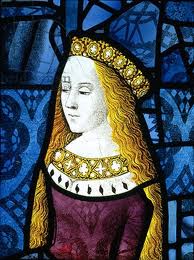 Princess Cecily of York was born on the 20th March 1469, the third child of King Edward IV of England and his wife Elizabeth Woodville. Among her contemporaries, Cecily was said to be the most beautiful of Elizabeth Woodville's daughters.
After two unsuccessful betrothals to Scottish nobles; the future James IV of Scotland in 1474 and to Alexander Stewart, Duke of Albany in 1482, Cecily was married at age sixteen to Ralph Scrope of Upsall who was a supporter of her uncle Richard. After Richard was defeated at the Battle of Bosworth and his supporters were disbanded and ousted from royal favour, the marriage between Cecily and Ralph was annulled after less than a year in 1486. They had no children.
Cecily was a prominent figure at court and among the royal family; she carried Prince Arthur at his christening and also Catherine of Aragon's train at her wedding to Prince Arthur in 1502.
In 1487, Cecily was married again to John Welles (born 1450), 1st Viscount Welles, who was the half brother of Margaret Beaufort, the new king's mother with whom she became close friends. The couple had two daughters; Elizabeth in 1492 and Anne in 1494. However, tragedy struck the family and within a year in 1498-9 John Welles and the two daughters all died and Cecily was left alone.
Three years after being widowed Cecily married again to a Thomas Kyme (born 1465), who was a Lincolnshire squire, in 1502. This marriage however was not for political alignment, it was a love match; "rather for comfort than credit"(Fuller's Worthies, vol 2, pg 165). The king was neither aware of or approved of the marriage beforehand; Cecily may have believed that by marrying someone of relatively low political standing and of little ambition to power that the king would be forgiving and accepting of the marriage. However, King Henry VII reacted to the news by banishing the couple from court and confiscating Cecily's estates; Welles' lands which she inherited upon his death.
The king's mother Margaret Beaufort, who had for a time been Cecily's sister in law, was the only person who spoke up for her to the king and fought for her estates to be reinstated. During this time Cecily and her new husband were living on a country estate belonging to Margaret Beaufort.
Eventually, Cecily's lands were restored to her but they would only be for her use during her lifetime; in that her husband and children of the marriage would inherit nothing.
The couple had two children; Richard and Margaret, however they did not enjoy royal titles or favour.
Cecily died in 1507, aged 38 on the Isle of Wight without the luxuries that being of royal blood would have afforded her so that she could marry for love.

Posted by Danielle Evelyn at 11:27 No comments:

Email ThisBlogThis!Share to TwitterShare to FacebookShare to Pinterest
Labels: cecily of york, history 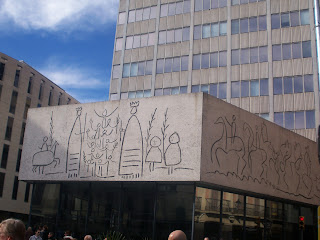 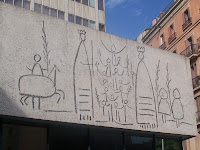 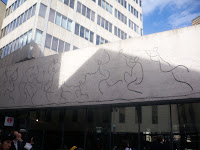 The city of Barcelona is filled with beautiful and unique architecture dating back thousands of years. This particular building however, is considered one of the least attractive in the city centre, and ironically it is the School of Architecture.
It was built in the 1970's and for the front of the building they wanted to place on it some artwork and so held a public competition whereby anyone can enter a design and the best one will be used on the school. The artwork that you see on the building is actually copied from a drawing done by the artist Pablo Picasso. However, Picasso had not drawn this with the intention of entering the competition, nor was it actually him who entered it. In fact, he had no recollection at all of drawing it.
The story goes that one night there was an exhibition of the new artist Joan Miro's work which was being hailed as the next big thing; Picasso did not like Miro's work and said Miro was child like and not a real artist. Picasso was jealous of the attention given to Miro, as even their mutual friends declared Miro to be good, and refused to go to the exhibition and instead spent the evening drinking in a bar and taking drugs. The mutual friends of his and Miro's came to meet him after the show to tell him what they thought, to make Picasso angry they spoke continuously about how great Miro was. Their plan worked and Picasso was furious. He threw all of the objects off his table onto the floor, grabbed a pen and told them 'you want a Miro? I'll give you a Miro!' Picasso then draws onto the tablecloth the image that is now on the buildings face, and he then stumbles out of the bar. The next day Picasso had no memory from the night before, including the picture he had drawn. The friends who had made him angry then kept the tablecloth and submitted it for consideration to be on the new school building, and it was chosen. So the artwork that is now on public display for all to see, which looks like a child could have drawn it is in fact the result of Picasso's drunken rage.

Posted by Danielle Evelyn at 23:37 No comments:

St George as the origin of World Book Day?

When I was in Barcelona recently I was taken on a walking tour of the city and the guide pointed out a wall carving of St George and the dragon, who is a patron saint of the city. I had always assumed that St George was a solely British icon. 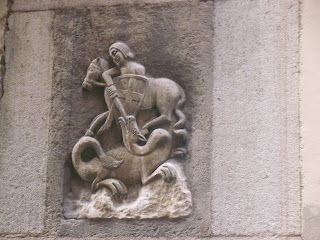 The guide then told us the Spanish version of his legend;
In Barcelona there had been a large pack of dragons living there until the people fought against them until there was only one left, this dragon then lived on the outskirt of the city in a cave but over the years he became very mean and bitter and would often attack the city. The king went to talk to the dragon and asked him what was wrong, as the people were letting him live there without being killed. The dragon demanded that once a month a young girl from the city, a virgin, was to be sacrificed to the dragon for him to eat. The king agreed to this deal. However, girls realised that this was to be their fate and so soon lost their virginity to protect themselves from the dragon. The only girl left was the king's daughter as she was to save herself for her wedding night. The king desperately sends a message to the world that a dragon needs to be slayed and that the man will be rewarded. On the 23rd of April the day comes when the princess is to be sent to the dragon, she goes to the cave, however at this point a man on a white horse rides up. The man is George, the world famous dragon slayer who has come to save the princess. George slashes the dragon's throat, spilling his blood over a field, and the blood then turns into a field of roses. George picks a rose and gives it to the princess who falls in love with him and they ride of into the sunset for a happily ever after.
It became the tradition in Barcelona to always give a rose to a loved one on that day of the year, in a similar fashion to Valentine's day.
In time, tradition changed and on that day the couple would exchange gifts in the form of a rose for the woman and a book would be given to the man. The book is given to commemorate the Spanish author Miguel de Cervantes who died on the 23rd of April in 1616.
The tradition of giving a book as a gift on a certain day of the year became famous in Spain, and also came to the attention of the rest of the world. In the 1990's the UN regarded this tradition as a good way to get people more interested in books and reading, and so in 1995 the first International Book Day was celebrated on the 23rd of April. The date also coincides with the birthdays, and death days, of writers Shakespeare and Cervantes.

Posted by Danielle Evelyn at 21:47 No comments: